Disclaimer: We may receive a commission for products purchased through some links in this article.

Hitting whitewater with a kayak is outrageously fun, but it’s also serious business. You really don’t want to play around with an inappropriate kayak in water that presents this level of danger.

The best inflatable whitewater kayaks are designed to handle a lot more than a little splashing.

Class II, III, and even class IV rapids can take a toll on any inflatable kayak, and it’s important to mull over how you want to use your whitewater boat before making a purchase.

There are a number of considerations that can make one inflatable whitewater kayak perform significantly better than another. Beyond just making an informed decision when you invest your hard-earned cash, your safety and well being might be on the line.

Getting the proper gear is vital with whitewater kayaking. When you get it right, the fun meter gets maxed-out pretty quick.

We listed some of the most important considerations and reviewed 5 of our favorite inflatable whitewater kayaks below. The quick comparison chart can also be helpful for quick answers and making the decision making process easier. 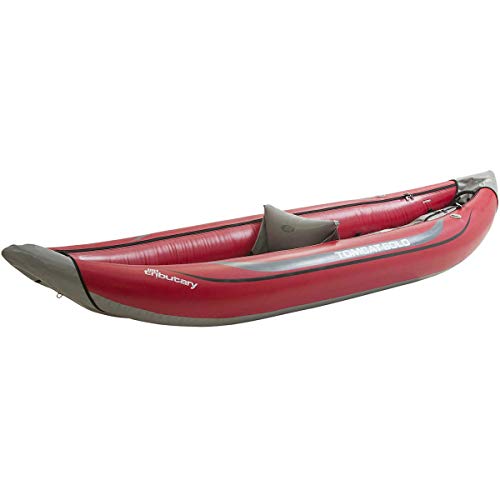 If you are looking for a solid inflatable kayak, then you might want to consider this option from AIRE. It is available in several different colors and while expensive it’s important to note that you are getting a high-quality item. This could serve you well, even on some of the roughest waters that you are likely to encounter. It is important to note that is kayak is ideally suited for one person. As such, if you are are searching for an inflatable kayak for two people you are going to need to look elsewhere

However, you might be able to fit in a dog at the front. So if you are keen to take your pet along for the ride this could be a big bonus. The product also provides a patch kit that is useful. It will mean that you are easily able to repair the item if it does ever get damaged when you are out on the water.

The kayak does not arrive with a pump however these can be bought separately and may be beneficial if you are planning on heading out on rougher water. Although this is suitable for both class II and class III whitewater. It is sturdy, particularly at 2.5 PSI for each chamber and handles far more effectively than the typical commercial ducky. You can even surf some smaller waves. Ultimately, you’ll find that this particular kayak handles beautifully, particularly when considered as a mid-level kayak. You’ll find large eddies are easy to catch in this kayak but smaller ones will be more difficult. You can also use an electric raft pump to inflate this kayak. That’s brilliant because it means that you don’t have to waste a lot of time and energy preparing it for the water. Instead, you’ll be able to get going as soon as you reach the location.

Ultimately with this kayak, you are getting a high-quality product that provides fantastic value for money and can handle rough white water.

This kayak from Driftson is available in two different colors. You can either opt for a light blue variation or the standard orange with grey shading. A big benefit of this possibility is that you do get a lot more with the item rather than just the kayak itself. This includes a pump as well as sturdy paddles. The price is a little higher than the previous option on this list though so that’s something to keep in mind.

Similar to the other option on this list, you can not use this for two people. If you try, you simply won’t gain the right level of maneuvering that you want. There are three chambers to inflate for this kayak. However, it’s still relatively simple to set it up the right way without any issues. You should also keep in mind that this kayak does come with a repair kit. However, you won’t get the glue so you may need to buy this separately. A big benefit of this particular kayak is that the seats are adjustable. That’s fantastic because it means unlike other options, it’s suitable for a wide range of different heights. You don’t need to worry too much about not fitting into this one. There’s no storage compartment for the different items however, you can easily use the tie does to secure items you bring on board.

This kayak is made of 1000d polyester so it is tough and designed for strong white water. It’s also incredibly easy to set up and with the use of the pump, you won’t have any issue getting this prepared for the water. You will also be delighted to find that everything fits easily into the tote making this kayak simply to carry around with you when you need to.

This is the first option on our list that is in fact ideally suited for two people to use. As such, you don’t have to worry about not being able to take your partner with you. It’s also far more budget-friendly and you’re probably wondering whether that means a lower level of quality.

First, it’s important to note that with adjustments, you can ensure that this is suitable for use as a single kayak too. You just need to remove one seat and put the other in the middle like a solo kayak. This kayak is also designed to handle class 3 rapids. However, it’s worth noting a lot of water is going to come in at that level. But you will be able to pump it out at the end. You will also be pleased to hear that in a calm stream or lake, this kayak is going to stay incredibly dry unless you have a leak. You just need to be careful that you don’t drag the drainage plug as that will cause significant issues.

The seats are also comfortable. This is going to be great news if you are planning on longer river journeys or using the kayak repeatedly over a period of a few hours.

While the stitching is certainly not perfect, you will find that it tracks quite well. Particularly when compared to other inflatables that are available on the market.

While only available in one color, this kayak does offer high-quality design and is built to remain durable even in difficult conditions on the river. A top-selling point that was missing from the other options is that this does have a storage point. As such, you won’t have to worry about the items that you take with you getting wet. You’ll be able to keep them dry even in class 2 and 3 rapids.

The kayak also provides a high standard of quality, particularly when you consider the price. Indeed, you may find that this kayak is worth significantly more money than you actually end up paying for it. You’ll find that it is very stable even on difficult rivers and in fast-flowing water. One of the reasons for this is that the kayak is incredibly well-engineered. You won’t find any issues with the build of this particularly kayak, that’s a guarantee. This means that you can, with confidence, use it in glass III rapids. Remember, this isn’t always a guarantee. Particularly if you choose a kayak in the lower price range. However, there’s no trouble here.

The kayak is light too and weighs just 34 lbs. That’s despite the fact that it is made from highly durable and tough 840 PVC. This means that you won’t have to worry about carrying the kayak to where you need it which can be a key consideration.

The kayak also provides an adjustable seat and this is just one of the features included to ensure that you do gain a comfortable experience. You don’t have to worry about this one starting to cause aches and pains halfway down a river. There is also a self-draining rear cargo hold. That self-draining feature is a great benefit and will ensure your items remain dry by the end of your trip. 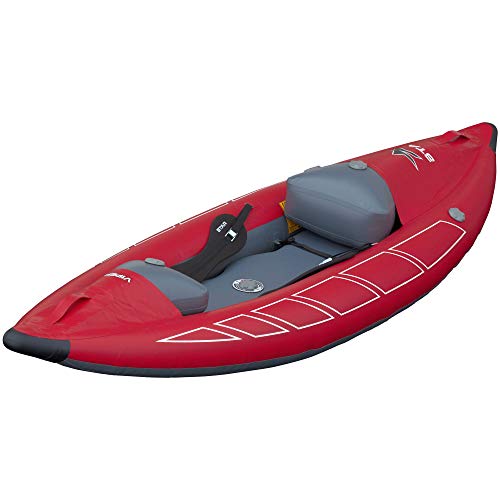 Alternatively, you may want to consider this kayak from Star Inflatables. Similar to the other options on this list, it is available in several different colors. As such, you will be able to find the one that matches your style and needs. There are lots of innovative design features of this particular kayak. It’s not just built for the water. The designers have also considered how easy it is to carry back and forth. This is something that is often, overlooked which can lead to issues. However, you’ll find this is a breeze to transport, even over significant distances.

The purpose of this kayak is to provide the durability of a hardshell design while ensuring that you still get the convenience of an inflatable solution. They have certainly succeeded here and you’ll find that it does handle Class III white water with no problem at all. At the same time, it is light enough and easy enough to transport that you won’t have to worry about needing any special rig.

There are design features that ensure it’s an absolute delight on the water too. One of the problems with inflatable kayaks is that if they end up in holes, they can flood with water. This means that they do not resurface as quickly as they should. We’re thrilled to say that this isn’t a problem with this particular model. This is due to both and inflatable bow and stern displacement chambers. It ensures that the kayak does float as it should even in the toughest conditions. Ultimately, we think you’ll be delighted with the durability this option provides. You certainly won’t have to worry about it failing you after a couple of times in the water. Instead, you’ll be able to depend on it for quite some time.

Here is a good overview of the Star Viper Whitewater IK